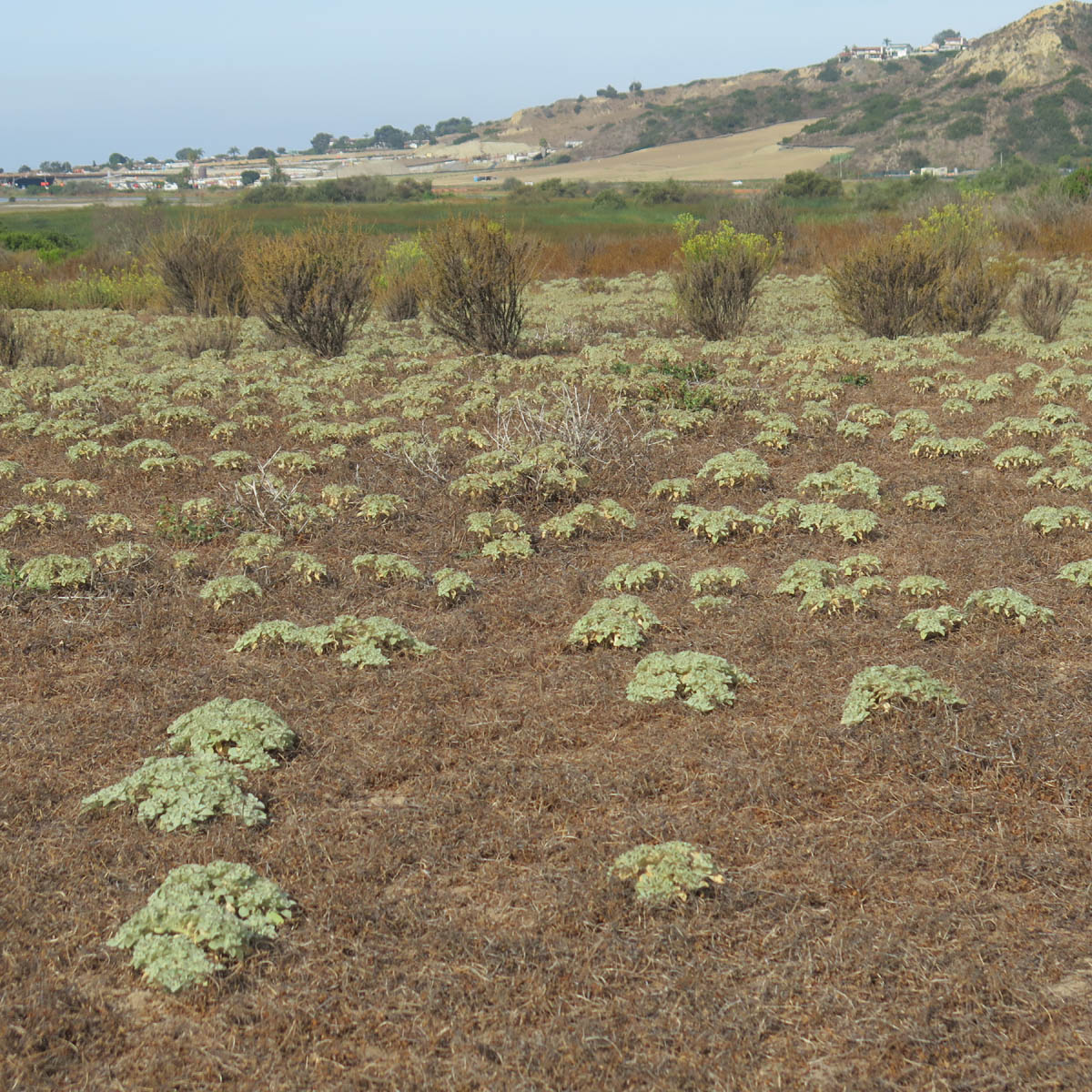 Doveweed or turkey mullein (Croton setiger) is a low growing, native annual that thrives in dry, disturbed, open places, such as on Stonebridge Mesa. Even from a distance it can be  recognized by the low, tidy mounds of pale green foliage, themselves evenly spaced out into large patches and fields.

The small flowers lack petals and are inconspicuous. The seeds are an important food source for small mammals and birds (including, as the common names suggests, doves and turkeys).

Species from the genus Croton should not be confused with the colorful, tropical houseplant with the common name croton (Codiaeum variegatum).

Doveweed is a small, neat greenish-gray plant that forms small mats or mounds; ours are usually less than a few inches high and two feet wide. The plant has a deep taproot, and it is regularly branched outward from a basal point. The leaves are rounded triangular to oval, with three prominent veins; they are reported to three inches (8 cm) long. All parts of the plant are covered with dense pale hairs. Most hairs are star shaped with many arms of similar length, others are similar but with a long, bristly hair emerging from the center. Minute glandular hairs beneath star shaped hairs give the plant a distinctive, not unpleasant odor. The hairs can irritate the skin.

Plants in the Reserve tend to occur in large, distinctive patches with individual clumps of one or a few plants well separated from one another.

Male and female structures occur on separate flowers on the same plant (they are monoecious). Both sexes are inconspicuous. Male flowers are 1/8 to 1/4 (0.4 cm) across, in small groups at the ends of branches. They lack petals. The calyx is green and cup-shaped, usually with five lobes. There are 6-10 stamens exserted beyond the calyx with cream colored anthers and pollen. The female flowers occur in groups of one to a few in the axils beneath the male flowers. Female flowers lack both sepals and petals. There is one pistil with a plump, oblong, one-chambered ovary and one usually thread-like style, often curved or coiled. The main flowering period is May – October.7

The fruit is a dried capsule that splits into two valves from the tip. The outer wall of the capsule consists of two structures and appears two-layered. There is usually a single seed, about 1/8 inch (3-4 mm) long; it is a smooth ellipsoid, somewhat triangular in cross section and variously mottled or striped in tans, browns or grays, or occasionally solid. Doveweed is native to the west coast of North America below 5300 feet (1600 m); it is centered in California, but is also found in adjacent states and northern Baja, California. It prefers open sunny, dry areas, especially disturbed soils, such as abandoned agricultural lands and road sides.  It’s rapid and persistent growth in disturbed areas has earned it the status of “weed” among many farmers and ranchers.144,340

In the Reserve, doveweed is rarely found beyond Stonebridge Mesa where it forms a few large patches in the open areas along the northeast side of the mesa top.

Cliff spurge is a dicot angiosperm in the spurge family (Euphorbiaceae), a large, diverse group containing small herbs, vines, cactus-like succulents, shrubs and trees. Many euphorbias contain a clear or milky sap that is irritating or toxic. Flowers often lack petals, although some species have colorful bracts or glands that function as petals. Flowers are unisexual. Male and female flowers may be on the same plant (monoecious) or on separate plants (dioecious). The male flowers may have one or numerous stamens. There are several family characteristics lacking in doveweed: the pistil of the spurge female flower often has three styles; the ovary is usually three-lobed, and it ripens into a dry three-chambered capsule . Spurge seeds often have a fleshy appendage at one end.

Doveweed was previously classified in a one-species genus: Eremocarpus, separated from Croton on the basis of having both male and female flowers female flowers on the same plant,2,11 lacking both petals and sepals, having a single style, and by having a one-chambered fruit.306 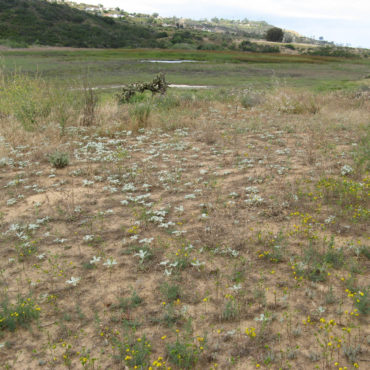 Doveweed and tarweed | Stonebridge Mesa | May 2016 The seeds of doveweed are smooth and heavy, with limited dispersal capabilities. Most land directly below the parent plant, forming dense aggregations, making them vulnerable to consumers when the protective foliage dries in the fall. The seeds of doveweed are an important fall resource for small mammals and birds, especially dove, turkey and quail. In one study, 43% of the doves had been eating doveweed.

The seeds of doveweed come in several variations of color and pattern, but all plants produce some solid gray seeds as the plants become senescent. These gray seeds are chemically different from the others. One consequence is that they are not palatable to the doves, and they quickly learn to recognize and avoid them. It is thought that these gray seeds serve to buffer the populations against the intense seed predation. Several native American tribes found numerous uses for this plant. Fresh leaves were bruised and used as a poultice for aches and for asthma and the fresh leaves were soaked in warm water to make a bath used for chills and fevers.34,282  A tea was consumed for headaches and heart palpitations.282 Like soap plant (Chlorogalum parviflorum), the pounded roots of doveweed were used to stupefy fish for capture.34,75,282,293,500

The numerous hairs on the foliage of doveweed are indigestible and can block the digestive tract of herbivores. Too much doveweed in a pasture destroys its value for forage.144 But early Indians and modern hunters alike visit fields of doveweed to harvest birds that flock to the autumn seeds.

Note: There are a few reports of doveweed being toxic261,282 or toxic “to animals”.41,290 One tribe is reported to have used it to poison arrows, but several others used it internally for ailments. Some of these reports of toxicity may refer to the indigestibility of the hairs that cover the plant,to their dermal taxicity, or even to doveweed’s effect on fish. Doveweed is not listed as toxic by the California Poison Control System,209 nor by most of our botanical resources. I’m not sure why anyone would want to eat doveweed, but they should proceed at their own risk. The Spanish name for this plant is “Yerba del Pescado”, reflecting its common use for stunning and gathering fish.34 Doveweed and tarweed | Stonebridge Mesa | May 2016

Male flower has only calyx and stamens | Stonebridge Mesa | Aug. 2011