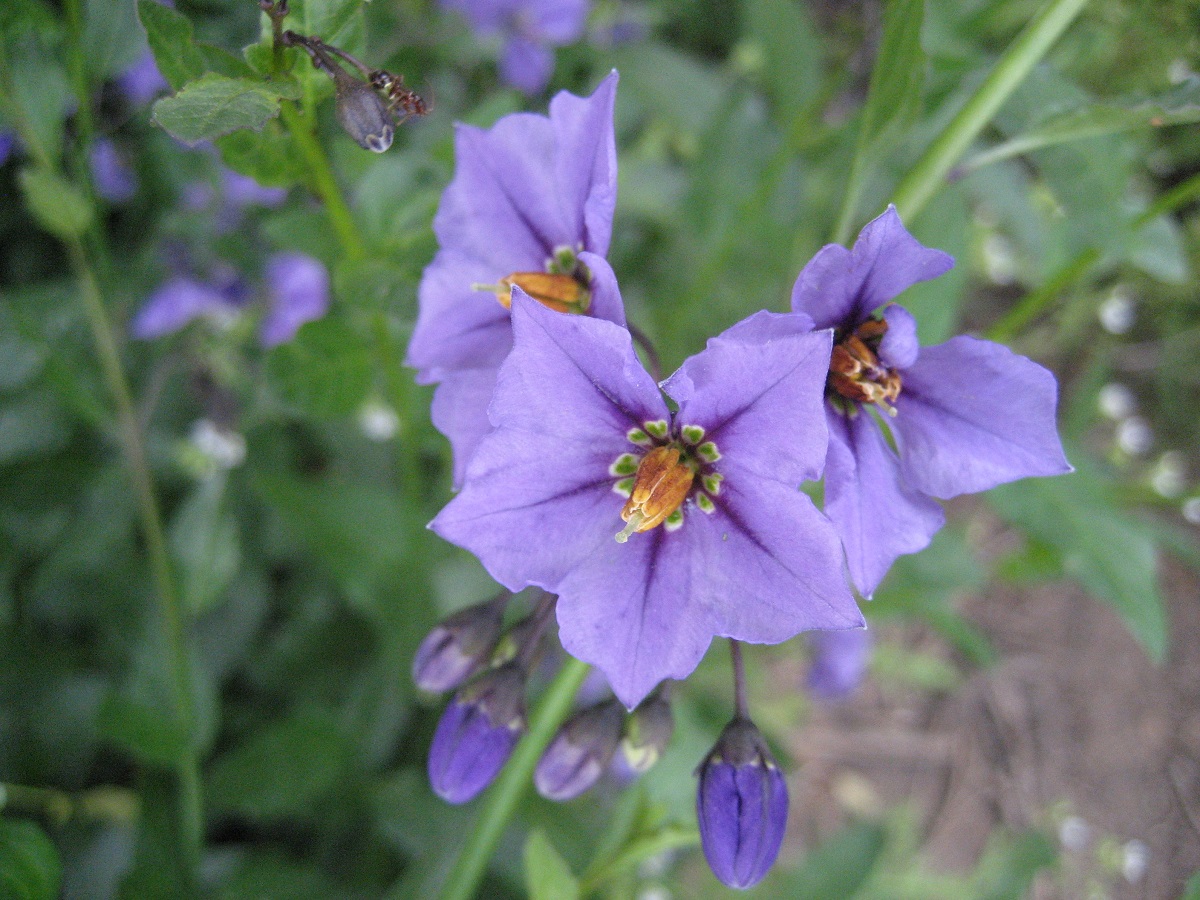 Our native Parish’s nightshade (or blue witch, Solanum parishii) bears clusters of purple flowers with bright yellow eyes. The flower resembles that of the garden potato vine, except for the white-rimmed green spots at the base of the petals. All parts of this plant are toxic, especially the fruit.

Like other species in this genus, Parish’s nightshade requires buzz pollination for efficient reproduction. This is provided by a few of our native bees, including bumble bees, that hold tightly to the flower and vibrate their bodies, thereby shaking pollen out of the anthers. This strange relationship is presumed to increase pollination efficiency for the plant and, for the buzz-pollinating bee, to reduce competition for pollen from other bees.

Parish’s nightshade is a perennial herb or subshrub. It is usually reported to be less than three feet (1 m) tall, though ours can be taller, especially when growing up through surrounding vegetation. Green stems are angled in cross section. Thin, green leaves are less than two inches (5 cm) in length, elliptical to ovate or obovate, smooth or sparsely covered with small hairs; the margins are flat or wavy and may be tinged reddish-brown.

Several to many flowers occur on short reddish-brown pedicels in pendulous, terminal clusters. Flowers are usually less than one inch (2.2 cm) across. The brown-edged green calyx has five lobes. The bisexual flower has five petals fused into a saucer-shaped corolla with five triangular lobes. Flowers are deep to pale purple; white flowers have been also reported in the literature.1,2 Each lobe has two white-rimmed green spots at the base, identified as glands by Allen and Roberts.59 Five stamens have bright yellow anthers that form an unfused cone around the style, giving the purple flower a conspicuous yellow eye. The anthers shed pollen through terminal pores. The pistil has a superior ovary with a slender style and small stigma. Major bloom time is March – June,1 although, as with many plants, a few blooms may sometimes be found in any month.

The fruit is a two-chambered berry, remaining green or greenish-white when ripe; it is less than 1/2 inch (1 cm) in diameter and usually has about ten small seeds.

All parts of this plant are toxic, especially the fruit. Parish’s nightshade in frequently seen along the trails on both sides of the Reserve, including the Nature Center and Stonebridge Mesa.

Parish’s nightshade is a dicot angiosperm in the tobacco family (or nightshade family or potato family; Solanaceae). Members of this family have five petals that are fused into a tube, at least at the base. Sometimes the petals or lobes are reflexed. Fruits are either a berry or a capsule.  Many members of this family contain alkaloid compounds which may be toxic or narcotic; these include scopolamine, atropine and nicotine.

The tobacco family includes many well-known food and ornamental species such as tomato, pepper, potato, petunia and night-blooming jasmine. The family also includes tobacco and belladonna. Eight species in this family have been reported from the Reserve48 including the toxic sacred datura (Datura wrightii), the threatened California box thorn (Lycium californicum) (CNPS list 4B), and the invasive tree tobacco (Nicotiana glauca).

The genus, Solanum, is partly distinguished by the anthers, which form an unfused cone around the pistil and which release pollen through pores at their tips.11  All members of this genus are toxic.

Three similar species of nightshade have been described. In addition to S. parishii, these include S. xantii (chaparral nightshade) and S. umbelliferum (blue witch). Several authorities have questioned their status as separate species.2,4 “…they are nearly identical and differ only in minor physical features that vary widely, overlap and are inconsistent….These three nightshades are probably best considered members of a single species.”59 Parish’s nightshade is among the 8% of plant species that depend upon a unique type of pollination – “buzz pollination” (or “sonication”). The anthers of most flowers release their pollen by splitting lengthwise, allowing the pollen to be contacted and carried by visiting insects, birds or mammals. A few plants, however, release their pollen through small pores in the tips of the anthers, like salt shakers, and this pollen needs to be encouraged to leave the anther. Some of our bees have learned to shake the pollen out by means of buzz pollination. Bumblebees are a good example of buzz pollinators, while honey bees are an important exception.

A buzz pollinator grasps the flower tightly and uses its indirect flight muscles to vibrate its body at an extremely high frequency – close to the pitch of middle C.314 This expels the pollen onto the bee’s body, from which it is groomed into pollen baskets on its legs and carried back to the nest. During buzz pollination, the audible hum of a bee increases in pitch.

This mutual adaptation is thought to benefit the plant by increasing the efficiency of pollen transfer by the bee at the same time, benefiting the bee by reducing competition for that pollen.330 In an oral history, Delphina Cuero, a local Kumeyaay woman, identified purple nightshade in Torrey Pine Reserve and recalled that the whole plant was gathered, dried and ground to use as a treatment for athletes foot.

NOTE: Although Delphina Cuero identified the plant as Solanum xantii, the plant in Torrey Pines today is S. parishii.1 Given the similarity of the two species it seems likely that the plant she referred to was the one known today as S. parishii. Like nightshade, some important crop species are in the Solanum genus and are also dependent on buzz pollination for efficient pollination. When growing tomatoes (Solanum lycopersicum) in greenhouses, growers traditionally relied on hand shaking or hand held electric pollinators (with fanciful names such as Electric Bee and VegiBee).

Recently, many growers have begun to use bumble bees to do the job more quickly, more cheaply and resulting in better tomatoes. When pollination is required, commercial bumblebee nests are brought into the green house. This has created a controversy in Australia, where bumble bees are not native and outside the greenhouse may displace native bees and pose serious environmental and agricultural risks. Greenhouse growers are lobbying for legislation that will allow importation of bumble bees while scientists are attempting to adapt the native blue banded bee for the buzz-pollination task.