California polypody (Polypodium californicum) is one of the few ferns found in the Reserve, and the most common one. It is native to moist areas throughout California and northern Baja. California polypody makes its appearance after the first winter rains and disappears during the dry summer months.

Like all ferns, California polypody is a primitive vascular plant, with reproductive bodies quite unlike the flowers and seeds of many plants. The life cycle includes an alternation of generations in which the diploid phase (the conspicuous frond) and the haploid phase (a tiny, flat, green plant that lacks leaves, stems and roots) are completely independent of one another.

Ferns are a primitive group of vascular plants. Their structure and reproductive cycle -and associated terminology- are unique.

California polypody is a perennial, drought-deciduous herb. The leaves (fronds) are produced, often singly, from a rhizome that runs horizontally at or near the surface of the soil.  The developing frond emerges from the earth in a tightly coiled position (from whence it gets it’s name: fiddlehead), uncoiling as the frond matures. In California polypody, the mature frond is generally oval or triangular, less than 14 inches (36 cm) long and held above the soil by erect or spreading petioles (stipes) less than half the length of the frond. The midrib (rachis) of the frond is green and raised above the frond on both top and bottom surfaces.  The frond is pinnately lobed, the lobes cut nearly to the rachis. The lobes tend to be alternate along most of the rachis, but may become more opposite near the base. Lobe margins appear smooth but close inspection reveals irregular, shallow serrations

On the lower surface of the mature frond are  clear, globular, stalked structures (sporangia) about 1/16 inch (0.2 mm) in diameter. Within sporangia are produced tiny, one-celled, haploid spores. Spores of California polypody are yellowish, and the sporangia occur in regular, oval clusters (sori) on either side of the midrib; sori are 1/8″ (3mm) or less in length. Mature fern spores are released and distributed on air currents, and those few spores that find suitable shady, moist habitat give rise to the alternate phase of the fern’s life cycle – an inconspicuous plant called a prothallus. This is a flat heart-shaped green plant that lacks leaves, stems and roots. It less than 1/2 inch (1.25 cm) across. The prothallus produces the reproductive structures. An antheridea produces flagellated male gametes, and an archegonium produces a single female egg. To effect fertilization, a gamete must swim to an egg. If successful, a new diploid fern plant develops, deriving nourishment from the prothallus until it has developed its own roots. This dependence on water for sexual reproduction is one reason why ferns are associated with moist environments.220 California polypody is found in California and northern Baja California, in shaded canyons and north facing slopes and along stream banks . It occurs in a variety of vegetation types below 5000 feet (1520 m).

In the Reserve, California polypody grows on the hillside above the south side trail in the Central Basin, where it sometimes becomes conspicuous after rain.

Ferns are a primitive group of vascular plants, plants which have developed specialized conducting tissues to move water, nutrients and food (as glucose) through the plant. The presence of vascular tissue allows plants to grow tall.223 Ferns were common long before the dinosaurs, and they dominated the vegetation during the Carboniferous period. Later, many fern groups became extinct, but a few developed seeds and it is thought that these ultimately gave rise to higher vascular plants – gymnosperms and angiosperms. A few fern groups persisted and evolved into modern ferns.222

Ferns differ from other vascular plants (all but the Lycophytes) in lacking flowers and seeds. Vascular plants are not motile. A key part of their life cycle is the dispersal of progeny. This minimizes competition with the adult plant (and other progeny) and allows the plant to spread into other environments. In flowering plants, seeds are usually the dispersal agent and they may be highly evolved with wings and parachutes to catch a ride on the wind, or they may have bristles and hooks to hitchhike on a bird or animal; many are carried away and stored by hungry animals; some seedpods explode.

Ferns literally catapult the spores out of the sporagium and away from the parent frond. Each sporangium has a ribbon of special cells (the annulus) that partially encircles the spherical sporangium from top to bottom. The cells of the annulus are filled with water. As that water evaporates, the internal pressure in the cell lowers and the cell walls are pulled inwards, causing the cell to deform. The annulus first begins to straighten, causing the sporangia wall to rupture. As more water is lost, the annulus bends backwards. Eventually, the internal pressure of the cells becomes so low that some liquid suddenly vaporizes (called cavitation), alleviating the internal vacuum. Without the deforming force of the vacuum, the annulus suddenly snaps forward, scattering the spores away from the frond. The analogy to an old-fashioned catapult is often used. The action has also been likened to a sporangial snowball fight. A wonderful video of sporangial action is found at the very end of the reference above. In our area, the Kumeyaay boiled the roots and leaves or internal bleeding. They called the fern ‘awi hatat, which means “rattlesnake’s back”, apparently seeing a resemblance.16

The Spaniards collectively called three similar ferns Yerba del Golpe, herb of blows. A tea was made from the roots and other parts and used internally and externally to treat wounds, bruises and sprains.15 Fern spores were once called fernseed. Because they were so tiny as to be invisible, it was thought that a person holding fernseed in his hand would become invisible also.221

To make an interesting print, take a mature frond, one with ripe spores on the underside, and place it on a white sheet of paper, spore-side down. Cover it with a book for a day or two. When the book and fern are removed, an image of the frond remains on the paper, “painted” in spores.225 The pale yellow color of California polypody spores makes for a rather ethereal image. 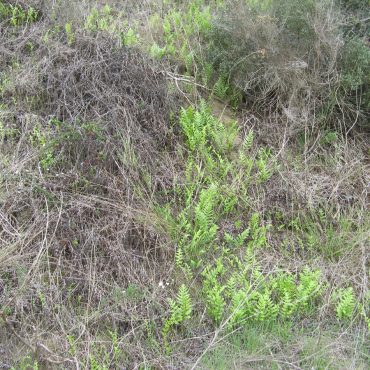