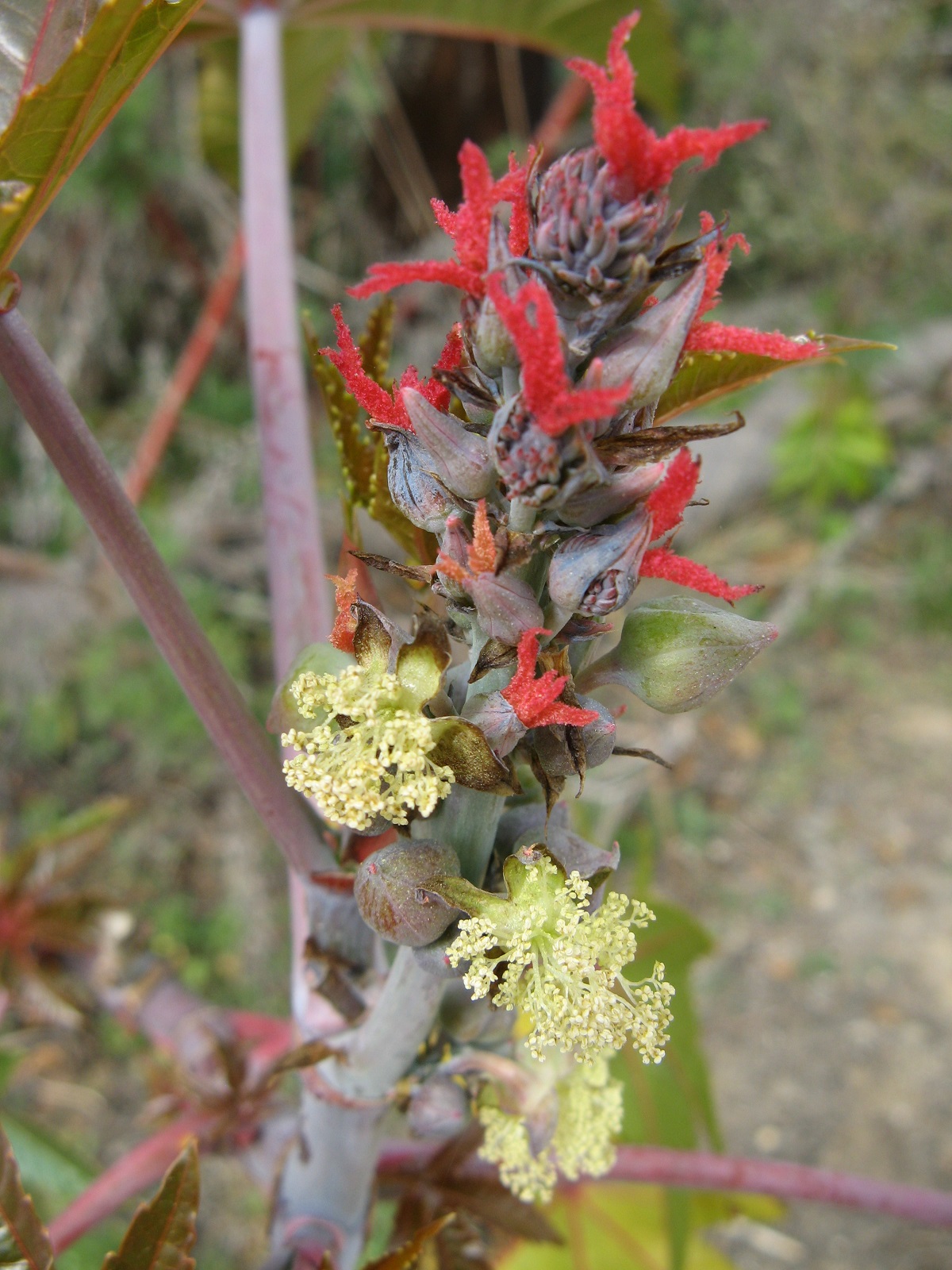 With shiny leaves the size of dinner plates, the castor bean (Ricinus communis) looks out of place in the Reserve – and it is. A native of tropical Africa, castor bean is invasive and is high on our list undesirable weeds.

The plant has two persona. It is the source of castor oil, used in food products, in medicines and as a lubricant in race engines. It is also the source of ricin, one of the deadliest toxins known, 6000 times more deadly than cyanide.

Castor bean is a tall, dramatic, perennial shrub. With age, it becomes woody and tree-like, and may exceed 13 feet (4 m) in height. The thick stems are pale, lightly tinged with green or red or purple. The shiny green or bronzed or reddish leaves are alternately attached to the stem and are frequently 12 inches (30 cm) in diameter or larger; leaves are attached to the petiole near the blade center. They are palmately divided into 5 -11 toothed lobes. At the top of the petiole are two rounded nectar glands, that secrete copious ant-attracting nectar.4,11

Flowers are unisexual, but attached to the same clusters of the same plant (plants are monoecious). The terminal clusters are dense and elongated, typically 8 to 18 inches (20 – 45 cm ) long. Female flowers occur above the male flowers. Both male and female flowers lack petals, and both have a greenish calyx with 3 to 5 lobes. Beyond that they are quite different from one another. The female flower has a single pistil  has a superior, three chambered ovary covered with greenish to purplish finger-like, sharp pointed projections. There are three styles, forked above midpoint, pale orange when young, aging to red. Styles are densely covered with minute projections, which give them a furry look. The male flower is about 1/2 inch wide, with  numerous cream-colored stamens in branched clusters of about twenty. Anthers are sub-spheroidal.  A large amount of wind-born pollen is shed. Flowers are present most or all of the year.7 They are generally described as non-showy, but that is debatable.

Mature fruits are are dry, three-lobed capsules, covered with the projections, which have hardened into sharp prickles. Capsules are about one inch (2.5 cm) in diameter, including prickles. There are three chambers, each with one seed. When dry, the capsule splits open, releasing shiny, ovoid seeds that are intricately mottled in brown and tan, approximately one-half to nearly one inch long. At one end is a fleshy projection (a caruncle or elaiosome), which is eaten by ants. Seeds are quite attractive, but contain ricin, a deadly poison. Castor bean is thought to originate in tropical east Africa, in the vicinity of Ethiopia, but it has naturalized in tropical and subtropical regions around the world. In many areas, including southern California, it is considered a noxious weed. It prefers moist, well-drained soils in disturbed areas such as river bottoms, road sides and fallow fields.

In California castor bean, generally occurs close to the coast from San Francisco Bay south to Ensenada, below 2000 feet.

In the Reserve, sizable castor beans persist in the southwestern part of the Central Basin, in spite of eradication attempts by the Conservancy and the large construction project by the railroad that destroyed much of the original population. In wet years, seedlings are likely to pop up anywhere along the salt marsh or riparian areas in the Central Basin.

Castor bean is a dicot angiosperm in the spurge family (Euphorbiaceae), a large, diverse group containing small herbs, vines, cactus-like succulents, shrubs and trees. Many euphorbias contain a clear or milky sap that is toxic or irritating; many have nectar glands outside the flowers. Flowers often lack petals, although some species have colorful bracts or glands that function as petals. Flowers are unisexual. Male and female flowers may be on the same plant (plants are monoecious) or on separate plants (plants are dioecious). The male flowers may have numerous stamens. The pistil of the female flower has three styles; the superior ovary is usually three-lobed and ripens into a dry three-chambered capsule that splits open on maturity releasing one seed per chamber. Seeds often have a fleshy appendage at one end.

Castor bean is the only species in the genus Ricinus, set aside from the other genera by the spike-like flower clusters with female flowers above the males, and by the alternate, palmately divided leaves that are attached to the petiole near the center of the leaf. Word collectors and Scrabble players may appreciate the word myrmecochory, the distribution of seeds by ants. This relationship between plants and ants has evolved several times and occurs in approximately 5% of flowering plants.41 To benefit from myrmecochory a plant must develop one or all of the following properties: the plant must attract ants; the seeds must be attractive to the ants so that they are carried to the ant nest; and the seeds must be resistant to damage from ants that would prevent germination.

In castor bean, ants appear to be attracted to the plant by the nectar glands that are associated with the leaves and flower stalks rather than the flowers (which are wind pollinated and do not directly attract insect pollinators). The fleshy structure at the end of the seed (the caruncle or elaiosome) is filled with nutritious lipids; foraging worker ants carry the seeds to their nests where they feed the fleshy structure to their young. The hard, smooth seed coat and perhaps the toxicity of the seed discourages the ants from consuming the seed itself, and the seed is discarded intact in chambers of the nest, or in a “discard mound” on the surface (where the soil is often elevated in nutrients that benefit germination and early growth of the seedling) .

Elements of this relationship have been demonstrated for castor beans and ants in Brazil. Brazil is outside the native habitat of the plant so it appears that the relationship is a flexible one that can be established fairly quickly with ants that have not evolved with the plant. On the other hand, we have found no studies relevant to castor beans in southern California, so the degree to which castor bean is myrmecochorous in the Reserve is uncertain (at least to us). Wherever it occurs, the transport of a hefty castor bean seed by tiny ants only one-third its length challenges the imagination. Castor bean, especially the seeds, contain a clear oil that has been used for centuries. The Egyptians and Romans used it for lighting. Several cultures used it as a purgative. Today it is used as a high-grade industrial oil and as a component in products as varied as paints and varnishes, soaps, inks, plastics, perfumes and skin creams. In 2013, world-wide commercial production of castor bean seed was estimated to be nearly 2 million tons.

The same plant that produces this useful oil, produces ricin, one of the most toxic materials known. (Fortunately, the extraction of the oil, leaves the ricin behind.) Ricin is estimated to be 6000 times more toxic than cyanide. Nevertheless, ricin has been studied and used as an anti-cancer agent260,384 and as an insecticide.41 In addition, there have been a few nefarious uses for personal or political gain.386 Georgi Markov was a successful Bulgarian novelist and playwright under the communist regime. He defected to England in 1968 where he worked as a broadcaster and journalist for the BBC World Services and used his position to harshly criticize the Bulgarian regime.

In 1978 Markov was waiting at a bus stop on the Waterloo Bridge when he felt a sharp pain in his thigh. A gentleman hastily apologized for poking him with his umbrella and walked away. Four days later, at the age of 49, Georgi Markov was dead. In his thigh, physicians found a pin-head-sized, perforated metal pellet. It contained traces of ricin.

Further investigations suggested a very sophisticated delivery weapon. It is widely believed that the assassination was the work of the Soviet KGB, but the murderer was never found.