Chalk dudleya (Dudleya pulverulenta) is a southern California native succulent that has been described as”alien”, “weird”,”architectural”, “charismatic, and “charming”. And it is.

Chalk dudleya is a succulent, evergreen herb. A short, thick stem (caudex) produces a dense rosette of thick, sessile, pale leaves, up to two feet (60 cm) in diameter. Leaves are oblong to oblanceolate, up to 12 inches (30 cm) long and four inches (10 cm) wide with a sharply pointed tip. As the plant ages, the base of the stem accumulates a skirt of dead leaves. The entire plant is covered with dense, white, waxy powder that readily brushes off, like chalk from a blackboard.

One to five (or more) long flower stalks (peduncles) arise between the basal leaves, spreading 12 – 40 inches (30 to 100 cm) above leaves and more or less densely covered with leafy bracts that resemble basal leaves toward the base, then decrease upward in size becoming heart shaped. Peduncles typically fork into 2-7 flowering branches. Bracts continue along the upper side of the flowering stem, alternating with the hanging flowers below.

The bisexual flowers are  strongly adapted for hummingbird pollination.306 The calyx is five-lobed and fleshy. The five elongated, overlapping petals form a long tube, very narrow at the throat and flaring out at the very end. The floral tube is primarily red, but the flowers appear striped with white due to the pattern of the chalky coating. There are ten stamens that do not extend out of the floral tube. The five pistils are fused at the base with superior ovaries, shaped like elongated bowling pins but closely pressed together. Ovaries taper to  short styles with small stigmas that barely reach the mouth of the floral tube. Five cup-shaped nectaries ring the base of the pistil and produce copious amounts of nectar. Chalk dudleya blooms primarily between May and July.1

After fertilization, the pedicels elongate and curve upward, reversing the orientation of the flower. The fruits develop within the envelope of the corolla, which toughens somewhat and turns purple-brown, When mature, each fruit splits open releasing numerous tiny seeds less than 1/32 inch (1 mm) in length. In the Reserve, chalk dudleya is scattered along the south-facing slope in Central Basin. Specimens have been planted at the Nature Center, and the species has been included in several of our revegetation areas.

Chalk dudleya is a dicot angiosperm in the stonecrop family (Crassulaceae), a family centered in South Africa but found worldwide except in Australia and the southwest Pacific islands. Members of this family are mostly succulent herbs. The typical stonecrop flower has three to five unfused sepals, and three to five petals. The number of stamens is equal to or double the number of petals. There are 3-5 pistils. Fruits consist of three to five unfused, dry, tear-drop shaped, one-chambered capsules.

There are many architecturally diverse, ornamental plants in the stonecrop family, including jade plant (Crassula ovata), and species of Sedum, Aeonium, Echeveria and Kalanchoe.41,206

Currently, there are 46 species of Dudleya recognized.429 Most are found on bluffs along the Pacific Ocean from southern Oregon through Baja California and on the offshore islands. Twenty six of these species are listed as rare or endangered by the California Native Plant Society.

Species in the Dudleya genus typically have thick, fleshy leaves in a rosette from a woody base. They are distinguished from similar genera by small differences in flower morphology. There are three species of dudleyas reported in the Reserve.48 In addition to chalk dudleya, we have lance-leaved dudleya (D. lanceolata) and ladies’-fingers (D. edulis). Other species have been planted around the Nature Center. 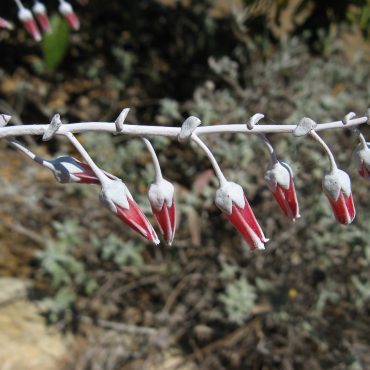 Chalk dudleya is highly adapted for hummingbird pollination, and their flowers show the classic characteristics for attracting hummingbirds and excluding insects.134,135,306 Flowers are a bright, warm red and tubular in shape with a mouth too small for bees to enter; they hang away from foliage, giving a hummingbird clear flying space around them. Since hummingbirds have poor sense of smell, chalk dudleya flowers have no scent, but produce copious quantities of nectar. The Kumeyaay used the succulent leaves of chalk dudleya to remove corns and callouses. The pad was heated and either skinned on one side or pricked thoroughly and placed, opened side down, over the corn or callus. Species of Dudleya have become the target in a lucrative smuggling operation, fueled by a growing demand for exotic house plants in Korea and China. At $50 or more per rosette, the potential profit is significant.

In California Fish and Wildlife’s first undercover botanical investigation, three individuals were arrested and linked to the illegal harvest and export of nearly 5000 dudleya plants stolen from the wild bluffs of northern California. The previous year 4,746 plants were recovered in a tractor trailer in Baja, California; these were a rare species stolen off the only island on which they are found. Their long-term survival rate is unknown.

While, so far, the big operations seem to have been located elsewhere and affected other species, no dudleya is safe. If you suspect dudleya plants are being removed from the the wild, notify the San Elijo Rangers or the California Department of Fish and Wildlife’s CalTIP: 1-888-334-2258 (www.wildlife.ca.gov/Enforcement/CalTip).

Meanwhile, volunteers have replanted some 2000 of the rescued plants back into their native habitat.430 The rest are being fostered by California Native Plant Society volunteers until the fall.

Note: In January 2021, Assemblyman Chris Ward introduced AB-223, to offer protection from illegal harvesting of all Dudleyas.527 This is the first bill in the history of California to focus exclusively on plants. In September 2021, the bill was signed into law.531