The leaves look like grass; the buds look like pussy willows; and the flowers looks like extra-terrestrial signal lights. Look down by your feet for dot-seed plantain (Plantago erecta), a diminutive native plant that rarely reaches eight inches high. This native plant is widespread throughout California and parts of Oregon and Baja California. In spite of it’s small size, dot-seed plantain is the primary host for the endangered Quino checkerspot butterfly.

Dot-seed plantain is a small, grass-like annual plant, usually less than eight inches (20 cm) high. A basal rosette of linear leaves surrounds one or a few taller, leafless stems each topped with a dense, spherical or oval cluster of flowers. Leaves are usually less than 3½ inches (9 cm) long and approximately 1/16 inch (2 mm) wide, gradually tapering toward the base. Leaves and stems are sparsely covered with long, loose hairs.

Terminal flowers clusters contain 2-several densely-crowded, bisexual flowers. The calyx is dry and membranous and deeply four-lobed; the lobes have a wide, green mid-stripe and are loosely covered with long hairs on the outer surface; lobes are often purplish at the tip. The corolla is four-lobed, whitish and semi-transparent; The base conforms to the ovary, continuing up in a narrow tube before expanding into four broad lobes. Lobes are initially upright, becoming reflexed as the flower opens. At the throat of each corolla are four reddish-brown swellings that provide a pop of color. The pistil consists of a superior, two-chambered ovary, a style slightly longer than the corolla throat and a linear, hairy stigma. There are four stamens that mature and are exerted after the pistil has matured. The corollas of some flowers never open. These flowers are self-pollinating. Dot-seed plantain blooms between March and May.1

The corolla persists around the developing fruit. The fruit is a capsule that splits and lifts off around the middle, like a cap, releasing two oval seeds that are flattened or concave on one side. Seeds are smooth, dull brown, about 1/8 inch long (3 mm) with white markings on the concave surface. Dot-seed plantain is native throughout much of California and into adjacent areas of Oregon and Baja California. It is found in grasslands and openings in coastal sage scrub, chaparral and oak woodlands below 2300 feet (800 m). In many areas it has been displaced by non-native plants and many of today’s populations persist largely on poor soils where there is little competition.

In most of the Reserve, dot-seed plantain is common but rarely seen due to its small size and the ease with which it blends into surrounding vegetation. Look for it in small clearings along the trail. The densest populations are found on Stonebridge Mesa where this little plant may dominate in large patches.

Dot-seed plantain is a dicot angiosperm in the plantain family, the Plantaginacea. Not long ago, the plantain family was a small, three-genus family with most species in the genus Plantago, which is characterized by small, inconspicuous, wind-pollinated flowers densely packed along an erect, leafless stem. Early this century, genetic information resulted in the merging of several families into the plantain family.84,88,310 Today, the Plantaginaceae contains nearly 100 genera. Although taxonomically related, modern family members are morphologically heterogeneous and are not recognized by a few obvious, universal characteristics. The family contains some well-known garden flowers such as snapdragons, foxgloves, and penstemons as well as the plantains many of which are obnoxious weeds and not to be confused with the banana of the same name.

In the Reserve, we have members of this family known for their bright cheerful flowers, such as Nuttall’s snapdragon (Antirrhinumnuttallianum) and Chinese houses (Collinsia heterophylla) and weedy invasives such as common plantain, or snakeweed, (Plantago major) from Europe and Asia that has become a pest in lawns and gardens.48 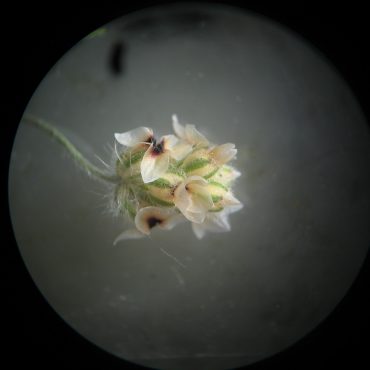 Most flowers are adapted to encourage cross-pollination among the plants of a population. This facilitates genetic diversity among the plants, which gives the population flexibility to adapt and thrive in changing environments and to evolve. Cross-pollination often involves pollen transport by insects, birds or wind. However, producing and maintaining features that promote cross-pollination takes energy and resources that would otherwise go directly into growth and seed production. Some plants produce and maintain bright petals and abundant nectar with which to attract insects. Wind-pollinated plants, such as the plantains, must produce an enormous amount of pollen to ensure that some grains reach the fertile pistils of other plants of the same species.

Many plants “hedge their bets” to some degree or another, by self-pollinating some or most of their flowers. The most certain way to accomplish this is to mature the anthers and pistil in the bud and self-fertilize before the flower opens (cleistogamy). This happens within the closed flowers of dot-seed plantain.2,59 In a study of 30 species in the normally wind-pollinated plantain genus,397 flowers that self-fertilized in unopened flowers produced only 5% of the number of pollen grains shed by wind-pollinated plants. Yet seed set in self-pollinated flowers was higher.

Self-pollination allows plants, especially annual plants, to persist during years when the pollen-transporting vector, be it physical or biological, is ineffective. For dot-seed plantain, that could be flowering seasons that are extremely wet or extremely calm, reducing wind transport; or periods when other dot-seed plantain plants are rare, reducing the chance of a pollen grain finding a receptive pistil on another plant. The production of numerous seeds of the same genetic composition also allows a plant to rapidly colonize a favorable environment from one or a few successful plants. Although the widespread occurrence of cleistogamy has only recently been appreciated, the basic ideas – like is often true – dates back to an 1897 review by Darwin.397 I have found only one indirect reference to the use of dot-seed plantain by “some native Americans”,15 but no details are given. The larger-leaved (non-native) plantain species were used by a number of tribes, including Chumash of Santa Barbara and the Channel Islands. Most often the leaves were crushed and applied externally for a variety of problems including wounds and headaches.15 In spite of its small size, dot-seed plantain is the main host for the endangered Quino checkerspot butterfly (Euphydras editha quino). Plantains contain a substance that is toxic to many organisms,11 but the Quino checkerspot is able to sequester this toxin which makes it less palatable to predators.

The lovely little Quino checkerspot was once abundant, occupying much of the coastal area and inland valleys of southern California.  The development has reduced its range by 75%. The current population estimate for this butterfly is only 5% of the original. Attempts are underway to reintroduce this butterfly to areas in San Diego county.398