Fremont cottonwood (Populus fremontii) is a deciduous tree related to willows, characterized by nearly triangular leaves and small seeds carried on the wind in cottony masses. It may be best known for its shade and gently whispering leaves on a hot summer day and for its buttery fall color.

Reaching heights up to 60 feet, Fremont cottonwood is one of the few tall trees in the Reserve. Cottonwoods need a nearly-constant source of fresh water. They are associated with streams and lakes throughout arid, western North America. The trees in the Reserve are found along natural seeps or along drainage from nearby residential areas.

Fremont cottonwood is a fast-growing winter-deciduous tree that may reach 60 feet (20 m) or more. Growth rates of 30 feet in a year have been reported.83 The pale grayish bark is smooth in young trees, becoming darker and deeply furrowed as the tree ages.5Leaves are smooth and triangular, 2 – 3 inches (5 – 7.5 cm) long, slightly broader than long, with a rather abrupt tip. Margins are shallowly scalloped. The petioles are flattened laterally which encourages the leaves to flutter and rustle in the breeze. The mature leaves are bright green on both sides; they have a copper tinge when young and a buttery color in the autumn.

Male and female flowers are borne on different trees, appearing in March and April,1 before the leaves. Flowers are small, lacking petals and clustered into drooping catkins. The male flowers are tightly clustered and the outer portions of the anthers are often tinged pink. When male catkins are numerous, they may give a tree a pink color. Female flowers are more loosely clustered.

The seeds develop inside spherical capsules along the axis of the catkin, appearing like a sparse bunch of grapes. Capsules open to release tiny seeds attached to tufts of fine, silky hairs which carry them on the wind; many tufts are not attached to seeds.  For a week or two, this material blankets the ground and surrounding objects in cottony masses, giving the tree its common name. 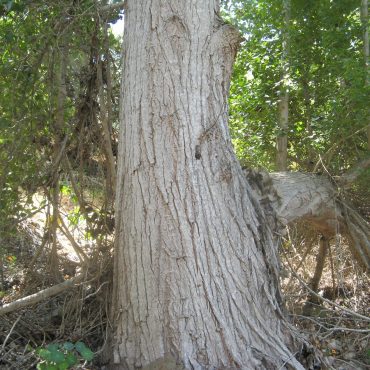 Fremont cottonwoods occur in wet areas within arid climates. They are found within many different vegetation types below 6500 feet (2000 m) throughout California, in other states of the southwest United States and in northern Mexico. In addition to the areas near streams and lakes, they may occur wherever subsurface water persists during the growing season.

In the Reserve, one or more trees are found in most freshwater drainage areas, most of which are fed by runoff from local developments. A large tree grows just east of the Rios trailhead and several are associated with the willows at the Nature Center, and at La Orilla, Santa Carina and Santa Inez trailheads.

Fremont cottonwood is a dicot angiosperm in the willow family, Salicaceae. Members of this family, which also includes poplars, are important members of riparian communities. They are characterized by flowers that lack petals or sepals and which are densely clustered in catkins. Male and female catkins occur on different plants.44

The other members of this family in the Reserve are willows.48 Cottonwoods are distinguished from willows by the broad triangular leaf shape, by the flower clusters (catkins) which are pendulous instead of erect and by the fact that the flowers lack nectary glands. Cottonwoods are pollinated by the wind, while willows produce nectar which attracts a variety of pollinating insects.

There is only one species of cottonwood in the Reserve.48 In California, at least six varieties of P. fremontii have been described but only one subspecies, P. fremontii ssp. fremontii is currently recognized.2,7 Fremont cottonwood is adapted to wet conditions and to regeneration after floods. Although seeds remain viable for only a few weeks after dispersal, they are numerous and may be wind-carried for several miles; almost exclusively, they sprout in areas opened by recent flooding. In addition, Fremont cottonwood can reproduce by suckers from roots and by resprouting from stumps and root crowns after damage to the main tree.

Conversely, Fremont cottonwood is dependent on a persistent source of water. It requires a groundwater source shallower than 10-12 feet. (3-4 m). Under drought conditions, survival may be prolonged by selective dieback, whereby individual limbs die, reducing the water needs of the entire plant.

Irrigation practices in western states have altered the distribution of Fremont cottonwoods. Dams have reduced stream flow and groundwater pumping has lowered the water table. These have resulted in the loss of large cottonwood populations. At the same time, the creation of unlined irrigation channels has opened a new cottonwood habitat.

Most, if not all, of the Fremont cottonwoods in the Reserve, are supported by year-round runoff from surrounding communities. Although we found numerous references to uses of Fremont cottonwood by native Americans,34,95 the details for use by Kumeyaay are scarce; they include a reference to use for structural, medicinal, utilitarian and ceremonial purposes.18

Like the related willows, cottonwoods contain salicin, a precursor to aspirin and numerous tribes used cottonwood bark or leaves as a tea or poultice for internal and external maladies.95

The Chumash, living around the Santa Barbara Channel, used cottonwood for house poles and occasionally made dugout canoes from the larger logs. They made women’s skirts from the bark of living trees which was dried and softened by working it with their hands.15

In Arizona, the Hopi consider Fremont cottonwood to be sacred. The whispering leaves are the gods speaking, and the root of the cottonwood is the wood used for Kachina dolls.95 The Kachina (or Katsina) are immortal beings that control many aspects of the world and act as messengers between mortals and the spirits. “Where there is any hope at all there are cottonwoods on the horizon.” 24