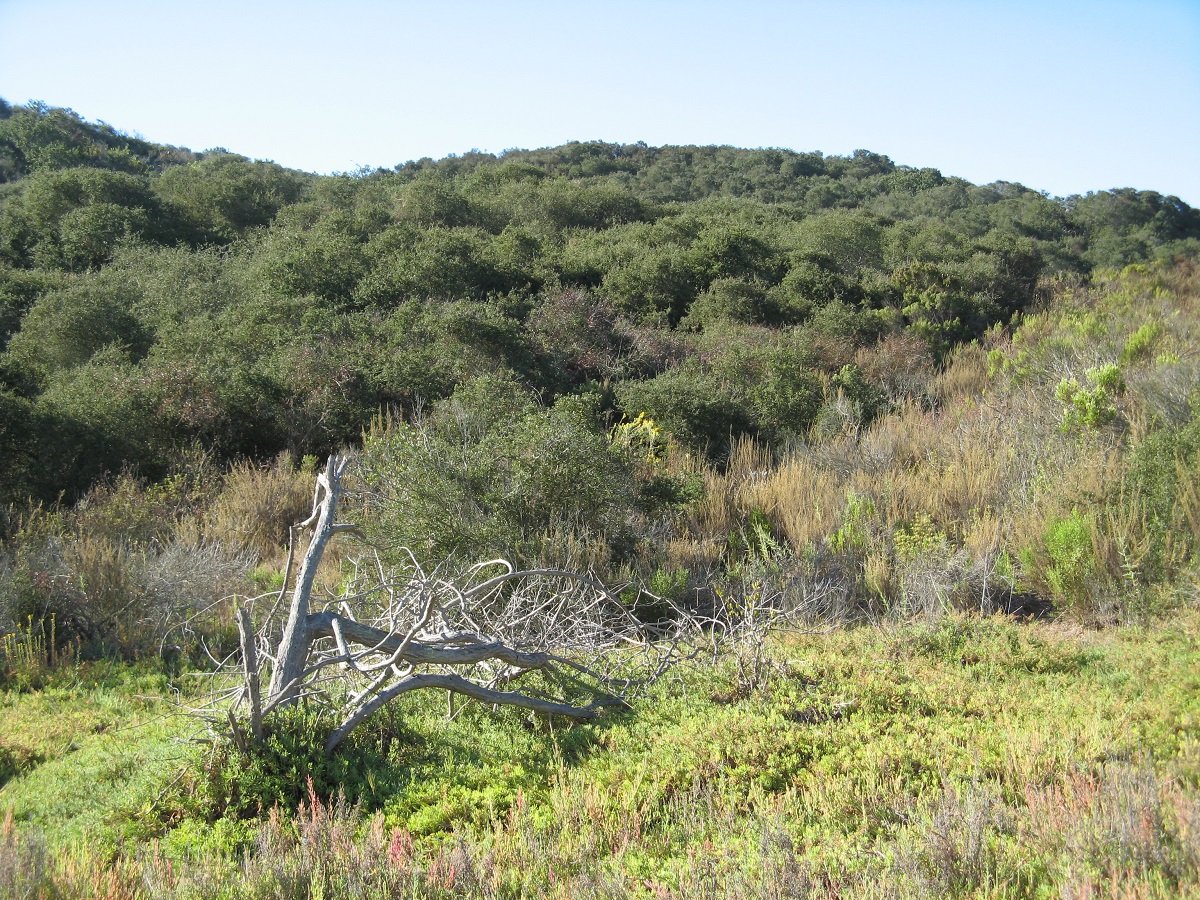 In the time long past of the bird people, Blue jay, who lived on acorns, stored them in the woods.

He knew where oak trees should grow and planted an acorn at every spot.

They are growing there now. Bluejay is the reason oaks are plentiful.

Although Nuttall’s scrub oak (Quercus dumosa) is the most common oak in the Reserve, it is one of California’s rarest species, generally found on sandy slopes and canyons within sight of the ocean where it has largely been displaced by large homes and associated human activities. Nuttall’s scub oak is a short, shrubby evergreen tree with small, undulating, prickly leaves, very different from the stately oaks of songs and poetry.

Nuttall’s scrub oak is a scraggly evergreen shrub, usually less than 13 feet (4 m) high, often from multiple trunks. The root system is large and deep. Twigs are short and stiff and make the shrub a scratchy, poking obstacle.

When young, leaves are apple-green, tinged with bronze; they age to dull green. They are small, oblong or elliptic, less than one inch (2.5 cm) long, often heart-shaped (cordate) at the base and with a short petiole. Leaves are stiff and leathery, often strongly undulate, sometimes cupped. Leaf margins are more or less toothed and the teeth are usually tipped with small, sharp spines. Leaf undersides are more or less covered with small, spreading curly hairs, many stellate with two to six rays.

The small flowers of scrub oak are unisexual with male and female flowers separated but on the same plant. Both lack petals and the calyx is inconspicuous. The male flowers are born on several short, slender catkins that hang in clusters at and near the base of young (spring) shoots. Each male flower has a few stamens. Female flowers are inconspicuous and difficult to find. They occur in small clusters in leaf axils along the outer portion of spring twigs, several nodes distant from the male catkins. Each female flower has one pistil with an inferior, one-chambered ovary about 1.5 mm long, and two to four styles each with a dark, button-like stigma. Nuttall’s scrub oak blooms March into May.1

Acorns are solitary or paired; they mature in one year. They are narrow, oblong nuts, usually less than 3/4 inch (2 cm) long, with a cup at one end and a small point at the other. The pointed end of the acorn often retains the dried styles. The acorn cup is a woody structure that develops from the involucre; it is covered with several rows of scale-like bracts that become wart-shaped as the nut matures. (The final appearance has been described as quilted.27) The inside of the cup is smooth, without hairs. The cup may remain on the branch after the nut has been shed. Like the other scrub oaks, Nuttall’s scrub oak is a frequent component of the chaparral vegetation and a less frequent inhabitant of the coastal sage scrub. (Our word “chaparral” comes from the Spanish word “chaparro” or small, evergreen oak.32,41) Nuttall’s scrub oak occupies a limited area of sandy soils near the coast in Southern California and northern Baja California, below 600 feet (200 m) and almost always within sight of the ocean.306 This is a habitat seriously impacted by development, fire suppression and other associated human activities,45,172 and Nuttall’s scrub oak has become one of California’s most endangered species.172 The oak family (or beech family, Fagacae) is a family of trees and shrubs, widespread in the north temperate latitudes with a few tropical species. Other well known trees in the family are the chestnuts.

Flowers are monoecious, and both male and female flowers lack petals. Female flowers are small and inconspicuous while male flowers are clustered into hanging catkins. The fruit is a nut, partly enclosed in a modified involucre. In oaks, this nut is called an acorn and the involucre (the acorn cup) consists of numerous, overlapping scales (bracts). Oaks may hybridize with closely related species, complicating identification.

Quercus dumosa used to be considered  one widespread species that we now recognize as six different species of scrub oak.306These oaks are distinguished on the basis of their acorn morphology and the trichomes (small hairs) on the leaves. Nuttall’s scrub oak is the only scrub oak that has been reported from the Reserve.48 Much of what we know about the ecology of scrub oaks come from studies before the current taxonomy of this group was accepted. Earlier studies do not distinguish some or all of the several species that exist today.5,306 Fortunately, the various species of scrub oaks appear to be very similar in general ecology.5

Scrub oaks have the primary drought-resistant characteristics of most chaparral species. They are slow-growing and evergreen with small, leathery (sclerophyllous) leaves that do not wilt; the small hairs on the lower leaf surface helps restrict water loss. Scrub oaks have extensive and deep root systems. One excavation of a seven-foot-high shrub revealed roots extending 20 feet below the ground.5 There is generally more biomass in the root system than above ground.27,36 Mycorrhizal associations (a close relationship between a soil fungus and a plant) increase the spatial extent and absorptive abilities of the roots.36 The tannins in the foliage are thought to deter herbivory.36

As a group scrub oaks are highly fire adapted, often being the first chaparral species to resprout after a fire, sending green shoots from a basal burl or the lower trunk.5,27,172 However, scrub oaks are not fire dependent. Both stump sprouting and seedling germination may occur without fire. In the absence of disturbance, an established population of scrub oaks remains remarkably stable for decades, recruitment closely balancing the death of old shrubs.5 In California, most acorns were an important food of the native Californians.15,17,41 However, acorns of scrub oak were ignored or used only as a last resort (“the Indian equivalent of C-rations”32 ). Scrub oak nuts contain higher levels of tannins,75 and may need more extensive treatment to make them edible.100

The Kumeyaay in Baja California,272 and Chumash in coastal central California15,360 used the hard scrub oak wood for firewood and for a variety of constructed products including clubs, bowls, and throwing sticks. The Kumeyaay cut the wood during a full moon, to ensure maximum strength. They heated the wood in a bed of coals to make it more flexible and bent it to shape around rocks.272 Among the plants native to California, oaks support by far the largest number of gall-inducing insects. Plant galls are curious, benign tumors on plants that are created through the interaction of a plant and an insect; in the case of oaks, this insect is most often a species of small cynipid wasp. Most gall inducers are plant-specific and produce a specific form of gall, but a plant may host several different galls. In the general case, the insect lays one or more eggs on the plant and injects the plant with a chemical that signals the plant to grow around the eggs, forming a swollen shape that encloses the insect eggs in a protected plant nursery where the eggs hatch, feed, grow and finally chew their way out of the gall to continue their life cycle.

“Oak apple” is a general name for several types of galls formed on oak branches; they are rounded and reddish like apples. The Luisaño of Riverside county used oak apples medicinally;17 they were dried and ground and made into an infusion for small cuts and sores, or used as an eyewash. Kumeyaay used the galls fresh, squeezing the juice directly on sores.272 Kumeyaay children, made toys by adding heads or arms or legs to the gall body, as imagination suggested.