San Diego sagewort is endemic to the coastal sage scrub and chaparral of coastal southern California and northern Baja, mainly in along coastal creeks and drainages and other small pockets that may receive extra moisture. Because of habitat loss and flood control efforts, Palmer’s sagewort has lost much of its original habitat and is now classified as rare, threatened or endangered by the California Native Plant Society.

Palmer’s sagewort is an upright or spreading, woody perennial, up to 9½ feet (3 m) tall, with long, wand-like stems. Foliage is aromatic, but less strongly so than the related California sagebrush (A. californica). Green leaves are deeply, pinnately divided into three to seven narrow segments. The midvein is depressed into the upper surface and the leaf margins rolled downward. Early and lower leaves are larger, reaching 6.5 inches (17 cm), green and smooth on top, grey with short hairs beneath. As summer sets in, larger leaves wither, often persisting on the stem.

Flowers form large, loose, compound clusters at the ends of the branches. The small flower heads are greenish-yellow and inconspicuous. Numerous flower heads nod from short pedicels along the terminal portions of stems. Each flower head consists of 8-30 pale yellow, glandular disk florets and a deep, rounded receptacle. Ray florets are absent. Although individual flower heads are small, they are numerous and together make attractive clouds of color. Disk florets are bisexual. The style is broad and curls strongly to the edge of the disk. A pappus is lacking. The reported bloom time is June through October.1 The numerous dry fruits are small, about 1/16 inches (1-1.2 mm) long and each contains one tiny seed. Palmer’s sagewort is native to, and almost completely restricted to, a small area in coastal San Diego County and northern Baja California below 3500 feet (1080 m). It occurs primarily in coastal sage scrub and chaparral, in washes, ravines and drainages and similar areas that have a little extra moisture. Because its habitat is threatened by development, flood control projects and non-native plants, Palmer’s sagewort is considered fairly endangered in California. Because the plant has a limited distribution within California, within which it is rare, threatened or endangered, the California Native Plant Society has classified it as 4.2 and recommends continual monitoring.45

In the Reserve, Palmer’s sagewort occurs naturally in a few localized areas. A fairly large population can be found in Central Basin, along the Rios trail, midway from the trailhead to the start of the Gemma Parks loop. Other plants can be seen in East Basin, along the spur trail to the Santa Helena trailhead, and a few plants grow at the Nature Center, near the SE corner of the outer loop trail. Palmer’s sagewort is also planted in the more moist restoration areas, such as the Ford Property along Escondido Creek.

Palmer’s sagewort is a dicot angiosperm in the sunflower family, the Asteraceae.2 This is the largest family of vascular plants in the Northern Hemisphere. “Flowers” of Asteraceae are made up of one or both of two types of flowers (florets): symmetrical disk florets and strapped-shaped ray florets. These are crowded onto a common base (receptacle), and together are often assumed to be a single flower, which we call a flower head. Other familiar Asteraceae that occur in the Reserve include bush sunflower (Encelia californica), goldenbush (Isocoma menziesii), and coyote brush (Baccharis pilularis).48

Species in the genus Artemisia have inconspicuous flower heads; ray florets are absent. The pappus is absent or minute.2 The other Artemisia species in the Reserve are California sagebrush (A. californica), wild tarragon (A. dracunculus) and California mugwort (A. douglasiana).48 Leaves are deeply divided | Central Basin, south side | May 2016

Like many species of the coastal sage scrub, the large, lush leaves of late winter and spring wither as the summer drought begins, leaving the smaller leaves along the upper stems. These leaves have a smaller leaf surface and are more water efficient during the summer drought. The withered, brown spring leaves can be seen clinging to the stem like a shaggy coat.

In addition, Palmer’s sagewort, along with the closely related California sagebrush, is a dew and fog grabber and can direct air born moisture on its leaves and channel it along the midrib to drip to the ground beneath.59,169 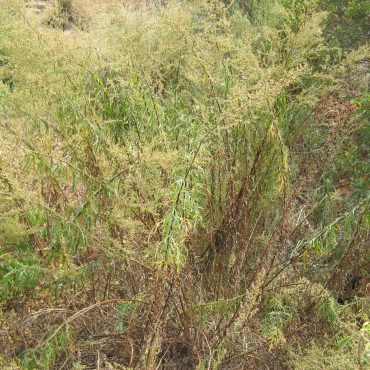 There are numerous records of native American use of our other local Artemisia species, especially for medicinal and ceremonial purposes;41 however we have not found specific mention of Palmer’s sagewort.

It is rumored that David Bowie ate Palmer’s sagewort while writing his album Low,290 but there seems to be a geographical disconnect since Bowie mostly wrote his album in France.41 Palmer’s sagewort was first collected in 1876 from ” California: San Diego County, in Jamuel Valley, 20 miles below San Diego,” by Edward Palmer. The following year the plant was given its official Latin name, Artemisia palmeri, after its collector.287

Edward Palmer was a self-taught botanist and anthropologist, an avid collector who produced a very large and important collection of plants, estimated to contain over 100,00 specimens, and now curated at several institutions, including the Smithsonian, the Missouri Botanical Gardens, Harvard University, and Kew Botanical Gardens. In addition, he sought out observations of the uses of plants by the local natives, leading him to be called the “father of ethnobotany”. 21,288,289 Flower heads with curling styles | Central Basin, south side | May 2016

Leaves are deeply divided | Central Basin, south side | May 2016

One sagewort was planted at the Rios trailhead | July 2010