Bishop’s lotus  (Acmispon strigosus) is a small, low growing plant that is native to several habitats in the western United States. Nevertheless, its sudden appearance in the Reserve in 2020 was unexpected.

Bishop’s lotus is generally known by the common name strigose lotus – a harsh, hissing, spitting sort of name that does not seem suited to this interesting little plant. Therefore, we have adopted the name used at Torrey Pines State Park: Bishop’s lotus.

Bishop’s lotus is a low-growing, highly variable relative of the more common deerweed (Acmispon glaber). Usually, several branches arise from a single point and spider out along the ground, each branch reaching a foot or less in length. In dense patches, branches from adjacent plants tangle and mound up, forming a soft ground cover. Stems are green, becoming dark red-brown with age. Leaves are slightly succulent and pinnately divided, each leaf having four to nine obovate to oblanceolate leaflets. Leaflets are irregularly arranged; there is usually a terminal leaflet between two opposite leaflets, with the remaining leaflets offset along the midrib. Leaflets vary from 0.12 to 0.4 inches (.3-1 cm), with the terminal leaflet the largest. There may be a leafy bract below leaf. Stems and foliage are usually sparsely covered with short, stiff hairs lying flat against the plant surface.

Flowers of Bishop’s lotus resemble those of deerweed although there is usually only one or two flowers (instead of a cluster), and they are held on a petiole  as long or longer than the flower. The small, bisexual flowers are 0.17 to 0.3 inches (.45–.8 cm) wide, bilaterally symmetrical, with five sepals and petals arranged in the typical pea structure, with one upright banner petal and two lateral wing petals surrounding two keel petals. The flowers are yellow, tinged with orange, with faint orange lines on the banner, radiating out from the throat. Flowers turn orange after fertilization, but do not persist long on the plant. There are ten stamens and a single pistil with a superior ovary. These are enclosed within the keel petals. The main period of bloom is Feb. – June.468

The fruit has the shape of a slim green bean, usually less than 1½ inches (3.5 cm) long, straight and curved near the tip, with short beak. When mature, the pod turns purplish and splits open into two often- spiraled valves. The grayish dark seeds are tiny, about .04 inches (1 mm). They have been described as “vertebra-like4 but to us they resemble teeth. 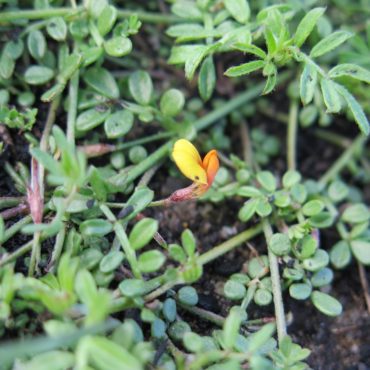 Flower with banner and wing petals | Central Basin, south side burn area | May 2020 Bishop’s lotus is native to California, southwestern Arizona and small areas in southern Nevada and northern Mexico, generally below 3,000 feet, but occasionally to 5,000 feet or more.

In California, Bishop’s lotus is a wide-spread plant of the sage scrub, chaparral and deserts, often found on sandy or disturbed soils and burned areas.8 Locally, it is listed among plants ““always present but much more abundant after a fire”.281

In the Reserve Bishop’s lotus was rare or absent in recent years until it appeared in large numbers following the 2019 burn along the Rios trail. At the same time, scattered plants were reported from the newly established sand dunes west of Coast Highway. Bishop’s lotus is a dicot angiosperm in the pea family (Fabaceae; previously called Leguminosae).4 Members of this family are characterized by their fruit, which is an elongated pod with seeds attached along one seam and which usually opens along the opposite seam. Leaves are often compound.

The pea family is the third largest family of angiosperms in the world and one of the most economically important, often associated with developing societies.44 In addition to peas and beans, the Fabaceae includes peanuts, licorice, acacia and clover. Some members of the pea family are toxic,143 including species in the sweet pea genus.209 Other members of this family found commonly in the Reserve include deerweed (Acmispon glaber), collared lupine (Lupinus truncata) and chaparral sweet pea (Lathyrus latiflorus).48

Acmispon belongs to the largest sub-group, Papilionoideae (or Faboideae or Pea). Members of this subgroup have a flower similar to a pea or sweet pea flower (papilionaceous) in which five petals have a bilateral arrangement of one upright banner, which envelopes the rest of the flower in bud stage, two wings and two lower petals, fused or not, that form a keel, enclosing the reproductive structures. There are ten stamens, nine united in a column around the pistil and one free. The pistil has a superior ovary and one long style with a small, capitate stigma; the style bends upwards from the ovary and extends just beyond the anthers. For many years Bishop’s lotus and deerweed (A. glaber) were placed in the old world genus Lotus. They are still found in this genus in less recent works and the old genus name is reflected in the common name The soil seed bank is the accumulation of viable seeds in the soil. This represents an important resource for vegetation recovery after a disturbance, especially fire. Like many key ecological concepts, the seed bank was first described by Charles Darwin in 1859.41 Since then, seed banks have received considerable attention, although because of the complexity of factors, full understanding still eludes us. Seeds of some species may survive in the soil for tens, even hundreds of years.  In general, studies in the chaparral and sage scrub indicate that the growth immediately after fire, often has little resemblance to the original vegetation, often dominated by annual plants which may be totally absent in adjacent vegetation and which persist for a year or a few years until being replaced with larger perennials shrubs characteristic of the area.

However, none of the studies – with all their numbers and plots – truly captures the feeling of witnessing the recovery in person. The Holmwood Canyon fire was about ½ acre that burned on October, 3 2019. Within two weeks, first green sprouts were visible. Shortly thereafter, the rabbits found the tender new sprouts and reduced them all noticeably. The seasonal rains began at the end of November, with the higher than usual mounts in March and the start of April.

Bishop’s lotus was first noticed on March 20, as scattered plants, roughly 10-12 inches in diameter. By April 2, additional plants had emerged and large patches were developing. By the fourth of May, patches had coalesced into a solid carpet of intertwined plants that was estimated to cover 50% or more of the burned area. By the beginning of June, Bishop’s lotus had largely disappeared from the site.

Before the burn, Bishop’s lotus was rare or absent entirely from this area. It had not been reported from the Reserve since three specimens were collected in 1990 and 1991.7 The quick response to the fire must have been fueled by viable seeds in the seed bank – not just one or two, but hundreds, even thousands. How long had they been there? Did they accumulate slowly over many years, or are they the memory of some large disturbance years in the past? And the biggest question of all – will the Bishop’s lotus return next year? Bishop’s lotus was used as a vegetable by the Luisanos. The interesting little Bishop’s lotus has been saddled with a harsh sounding name, Acmispon strigosus more befitting a plant with itch-inducing sap or skin-ripping spines. The generic name, Acmispon, comes from the Greek word, “acme”, meaning point. This is in reference to the pointed tip of the peapod-like fruit. The species name, strigosus, comes from the Latin, “strigosa” or “strigosus”, referring to the characteristic straight hairs that lie flat against the plant. Close up of leaf surface with "strigose" hairs | Central Basin, south side burn area | May 2020 Flower with banner and wing petals | Central Basin, south side burn area | May 2020

Close up of leaf surface with "strigose" hairs | Central Basin, south side burn area | May 2020