It is said that the sound of the breeze through the willow leaves is the sound of whispering elves.
English legend 508

Goodding’s black willow is the tallest willow in the Reserve. Our few trees can best be seen along the loop trail at the Nature Center, where they rise above the smaller, but more abundant arroyo willow (S. lasiolepas). Unlike arroyo willow, which flowers in late winter before the leaves appear, Goodding’s black willow blooms as the leaves open in March, splashing the ponds with the color of spring.

Goodding’s black willow is a large, winter-deciduous tree, with heights reported to 60 feet (20 m). The bark is dark gray and deeply fissured, and twigs are often yellowish.  Leaves are bright green, and, unlike many willows, they are the same shade top and bottom. Leaves are two to four inches (5 – 10 cm) long, narrowly lanceolate, tapered or rounded at the base and tapered to a terminal tip. Leaf margins are usually finely toothed; young leaves often have small green resin glands on the marginal teeth. The leaves are supported by short petioles.  At the base of each petiole are two small ear-shaped stipules with stalked green glands that are especially conspicuous on young growth.

The tiny flowers of Goodding’s black willow open with the spring leaves. They are either female or male and crowded onto unisexual catkins, with male and female catkins on separate trees (dioecious). Catkins occur on the ends of leafy branches. Flowers lack petals and sepals; flower bracts, rather than sepals, protect the developing reproductive organs. The male flower consists of four to eight stamens with unequal green filaments, hairy below the midpoint. The anthers produce bright yellow pollen. There are two to four nectaries, occasionally visible as red spots among the filaments. The female flower consists of a single pistil and a nectary. The pistil is green, ovoid, tapering to two short persistent stigmas. Goodding’s black willow blooms primarily Feb. into April.468

The fruit is a dry capsule that splits open by means of two spreading valves. There are 16 small seeds attached to a woolly mass of tangled hairs that lifts the seeds high into the air currents. Goodding’s black willows are scattered throughout California, but they are more frequent in the Central Valley and west of the Peninsular Ranges in San Diego, Riverside and Orange Counties. They generally grow between 65 and 1600 feet (20-500 m), but have been reported above 6000 feet (2000 m).

In the Reserve, Goodding’s black willows are found in the riparian area at the Nature Center, especially along the southeastern portion of the loop trail, where they grow intermixed with arroyo willow. Since this area did not historically support riparian vegetation, it seems likely that these willows have been planted and are currently supported by runoff from the local residential community. Goodding’s black willow is a dicot angiosperm in the willow family (Salicaceae). The willow family contains only two genera, Salix and Populus (cottonwoods, poplars and aspen). Members of this family are important members of riparian communities. They are characterized by unisexual flowers which lack obvious petals and sepals and which are densely clustered in catkins, with male and female catkins occurring on different plants.44

There are approximately 30 species of native willow currently recognized in California.7,50

Four other species have been found in the reserve:48 arroyo willow (Salix lasiolepas), sandbar willow (S. exigua), red willow (S. laevigata) and Pacific willow (S. lasiandra). Goodding’s black willow can easily be distinguished from the others by the fact that the leaf is lanceolate rather than linear and is bright green on both surfaces.50

Some botanists consider Goodding’s willow to be a western variety of the black willow (S. nigra).5 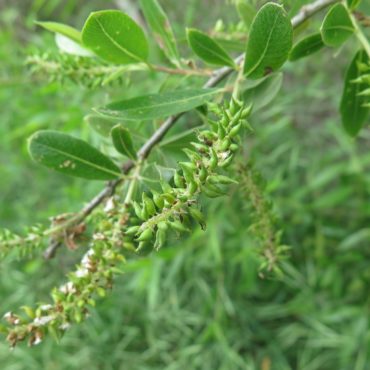 Willow seedlings are shade intolerant. Very few seeds find a suitable sunny opening in established riparian vegetation.504 The maintenance of a local population of willows is primarily through vegetative propagation. When willow trees are toppled or when limbs are broken off, the fragments have the ability to reroot and sprout and become one or more new willows.11,504

This is in part because of two compounds produced by willows: indolebutyric acid, or IBA which is a rooting hormone and salicin (best known as the active ingredient in aspirin) which is a plant hormone involved in a plant’s defenses; salicin helps the newly rooted willow resist infection by bacteria and fungi, giving the new plant a better chance at survival.507 Although willows are known for their medicinal value, arising from their production of salicin, the active ingredient in aspirin,51,52,509 they are now being recognized for their value in habitat restoration.505 Traditionally willows have been planted to control wind and water erosion5 and to dry swampy soils for farming and for malaria control. Recently the tolerance and uptake ability of willows for a wide range of chemical and organic contaminants has stimulated their use for the restoration of degraded soils and reestablishment of their biological activity. This has included restoration of industrial spoils and waste sites, mines and quarries, and shallow aquifers. In addition, willows have been proposed as purification plants for wastewater systems.

The lush willows at the Nature Center grow in what used to be a sewage settling pond that was abandoned in the early 1970s. Willows twine through the histories and beliefs of civilizations around the world:

In Greek mythology, willow was sacred to the goddesses of the underworld. Willow leaves were thought to protect a person from jealousy.41

In English folklore, a willow tree is believed to be quite sinister, capable of uprooting itself and stalking travellers.41

An old Celtic legend says that knocking on a willow tree will send away bad luck. This may be the origin of the modern custom to “knock on wood”.508

Folklore warns not to tell a secret while under a willow because the winds passing through the leaves will spread your secret.507

In Druid stories, the universe and all mankind was hatched from two scarlet eggs hidden within the willow tree. One egg formed the sun and the other the Earth. This was re-enacted in festivals’ using painted eggs, a custom later adopted by Christians for Easter. 510 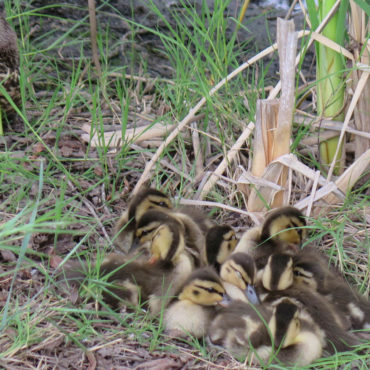